Create an Account - Increase your productivity, customize your experience, and engage in information you care about.

At the entrance to the Lexington Road Cemetery stands a bronze statue depicting a boy and a dog, with the following inscription at its base, from Alfred Lord Tennyson’s The Flower and the Crannies:

“Little flower - if I could understand what you are root and all, and all in all, I should know what God and man is.”

The sculpture, The Storrow Memorial, was created in 1923 by Cyrus Dallin, who had been commissioned by Lincoln resident Mrs. Helen Osborne Storrow, philanthropist, arts patron, and champion of progressive causes, as a tribute to her husband, Mr. James Jackson Storrow II.   The Storrows built an estate in Lincoln in 1910, and treasured their time there with friends and family, as well as groups from the Boys and Girls Scouts, organizations that each of the Storrows led.  Mr. Storrow was a leader of business, government, and charitable causes, including serving as the third CEO of General Motors, running for Mayor of Boston and spearheading the construction of the Charles River Basin.   After her husband’s death, Mrs. Storrow financed the completion of the Charles River Esplanade, and the City later named Storrow Drive in recognition of the couple’s service and generosity.

The Storrows loved Lincoln and spent their summers and as many weekends during the year there as possible.  In 1913, Mr. Storrow was diagnosed with an aggressive form of cancer.  Mrs. Storrow subsequently commissioned Cyrus Dallin to create a statue in his honor, to reside in the Lincoln cemetery.  Dallin was at the time well-known in Boston for his Appeal to the Great Spirit, which had recently been instated in front of the Museum of Fine Arts. Dallin also lived and worked out of his home studio in nearby Arlington.  In a letter to Dallin, Mrs. Storrow provided guidance:

I should think some figure emblematic of the spirit of out of doors would be appropriate and suitable for us.  I am sure you will make us a beautiful one that will have spirituality so that religious people will like it, and at the same time it would be suitable for people like us who have no fixed religious faith in the sense of believing in the dogmas of any church. For us it should not have wings, but have a look of believing in this world without expecting too much of anything after this life.  I am speaking very frankly, but neither of us have given much thought to anything beyond this life, and without denying what others think so essential, it seems to me some monument could express our feeling without shocking others.

The Storrows met as young people while both were hiking in Zermatt, Switzerland, and their shared appreciation of the outdoors, and the importance of nature for children in particular comes through in this directive as well as Dallin’s sculpture.

Cyrus Dallin was an internationally recognized sculptor, educator and Indigenous rights activist.   Other Dallin works in the region include the Paul Revere Monument and Anne Hutchinson in Boston, Menotomy Hunter and the Robbins Memorial Flagstaff in Arlington, and Massasoit Ousamequin in Plymouth.  Significant works in other major US cities include Signal of Peace in Chicago, Medicine Man in Philadelphia, and Angel Moroni in Salt Lake City, atop the Mormon Temple.

To learn more, visit the Cyrus Dallin Art Museum at 611 Massachusetts Avenue at Pleasant Street in Arlington Center and the Museum’s website www.dallin.org . 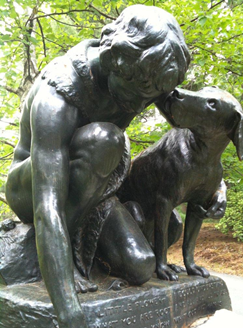 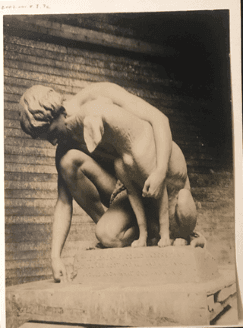